I'm so glad you decided to join me on my blog. I'll offer product tips, techniques and information. You'll also see the more personal side of our business. I hope you'll enjoy following us on this new journey. Carol

Make Your Own Design Wall

I finally got around to making a Design Wall for my studio. We moved almost a year ago and I didn't realize how much I depended on one until I didn't have one.

My studio is very small.  I had to come up with a solution that would give me the maximum amount of space. The room is 11' x 10'. By the time I put a Cutting Table, Ironing Board and my Sewing Machine in there, that doesn't leave much room for anything else. I know I'm spoiled because every room I've worked in before this has been much larger and many people work in a much smaller space.

I found a couple YouTube videos about how to make a design wall and used a little bit from each to make mine. One of the videos showed using duct tape to make a design wall that hinged. I knew I wouldn't have room to swing the wall out on a hinge so I decided that I'd make 2 of them but keep them separate.

I purchased 2 sheets of Insulation Board. They are 8' tall and 4' wide. My ceiling is 8' so they just fit in the room. It was tricky getting them through the doorway and standing them up to see how they would work out.

The only place I had to work on this project was my living room floor. Here's a picture of one sheet on its side and the other sheet is on the floor. 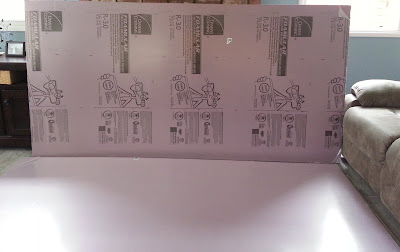 I decided that since it was so hard to get the board through the door and to stand it up, I would take 12" off the length. I don't make that many huge quilts. I'd have to stand on a ladder to reach the top if it was 8' tall and I can probably reach almost to the top of a 7' one if I stand on a step stool. We'll see if someday I regret that decision but for right now, I'm fine with it. 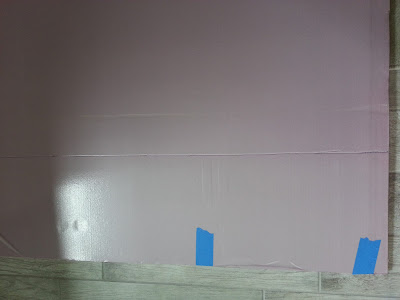 I used a ballpoint pen to mark so it scored the line. Then I used my acrylic ruler and a razor knife to cut on that line. I had to make a couple passes because the insulation board is 5/8" thick.

The front and back of the board was covered with a layer of plastic which I peeled off. 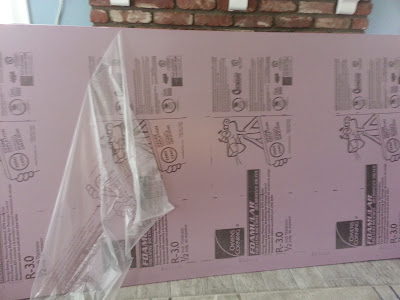 I chose the plain side as the "right" side of my Design Wall. I put that side face up on the floor. I used batting to cover it. I had quite a bit on a roll so that was the least expensive way for me to do it. I didn't have to buy something to cover it. You could also use flannel. The down side to flannel is that it typically is 32" - 40" wide which means you would need to piece it to make it fit on a 4' piece of Insulation Board.

I started by just laying the batting over the top and roughly centered it. It doesn't have to be exactly in the center because you are going to wrap it onto the back and no one will ever know whether it was centered or not. The way I did it you probably won't even remember which side was longer, even if you were to look on the back when it's all finished. 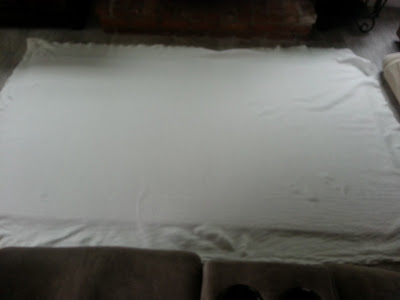 This was the time consuming and hard part. I smoothed out the batting. This involved crawling around on the tile floor on my hands and knees. I started on one end and smoothed it out. I pinned the batting into the side of the Insulation Board with straight pins. 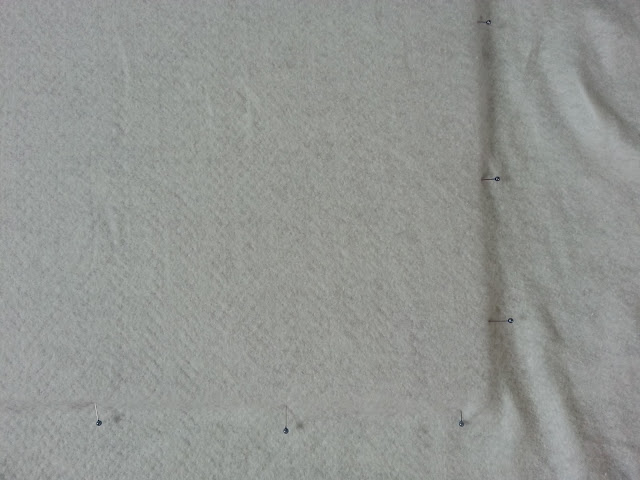 I worked my way all the way around smoothing it out and pinning it as I went along. 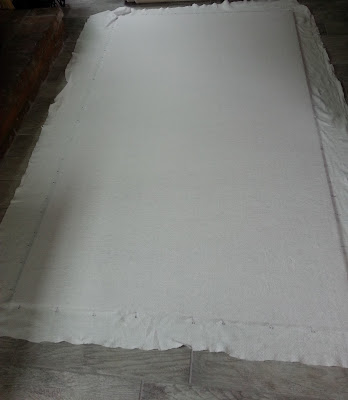 I will say that on the first one I did I didn't pull the batting as tight as I could have. I made it much tighter when I covered the second one.

Once it was pinned all the way around I flipped it over so I could work on the back. I pulled the batting around to the back and pinned it in place.

I worked my way all the way around and pinned an inch or two in from the raw edges. I folded and mitered the corners. 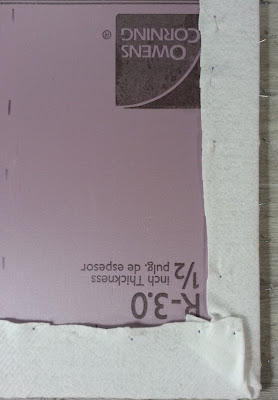 I roughly trimmed the batting all the way around. On some sides it was a lot wider. This probably wasn't a necessary step. It is the back and no one is going to see it. But I felt that I needed to do it so I did.

Then I started taping the back. I used duct tape. I had some on hand and felt that it would be stronger and less expensive to use than shipping tape, which I also had on hand. I knew that blue painter's tape which I also had wouldn't work. It wouldn't be permanent. I cut small pieces and put them every few inches all the way around, removing the pins as I went along.

After I went all the way around with the short pieces I did really long ones to make sure it was very secure. 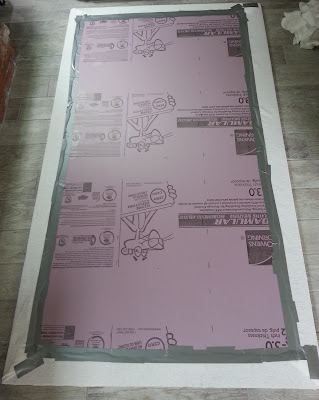 Voila! Flip it over and the Design Wall was completed. The first one took about an hour and a half to do. I did the second one in a little over an hour. This picture shows the finished one in front of the second piece of Insulation Board which hasn't been trimmed yet. 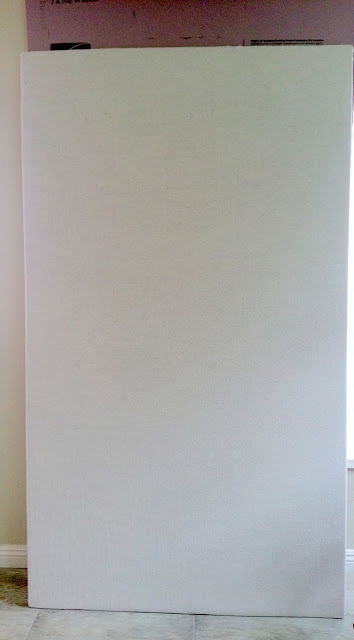 I put them in my room with the cut edge at the top. I figured it was rougher and might not be as straight on the floor. I keep them one in front of the other off to one side when I'm laying out a small project.

For a larger one I just slide the top one over to the left, line them up in the middle and I have one large Design Wall. Here's a picture of a project up on the wall. 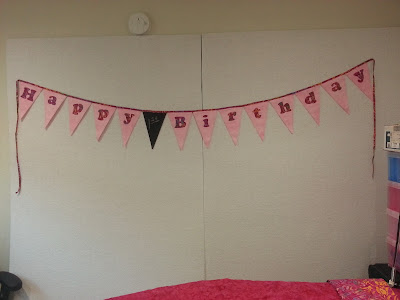 Watch for another blog post soon about why it is a good idea to have a Design Wall. It is actually related to the project you see in this picture.

Until then, Happy Sewing and Quilting, 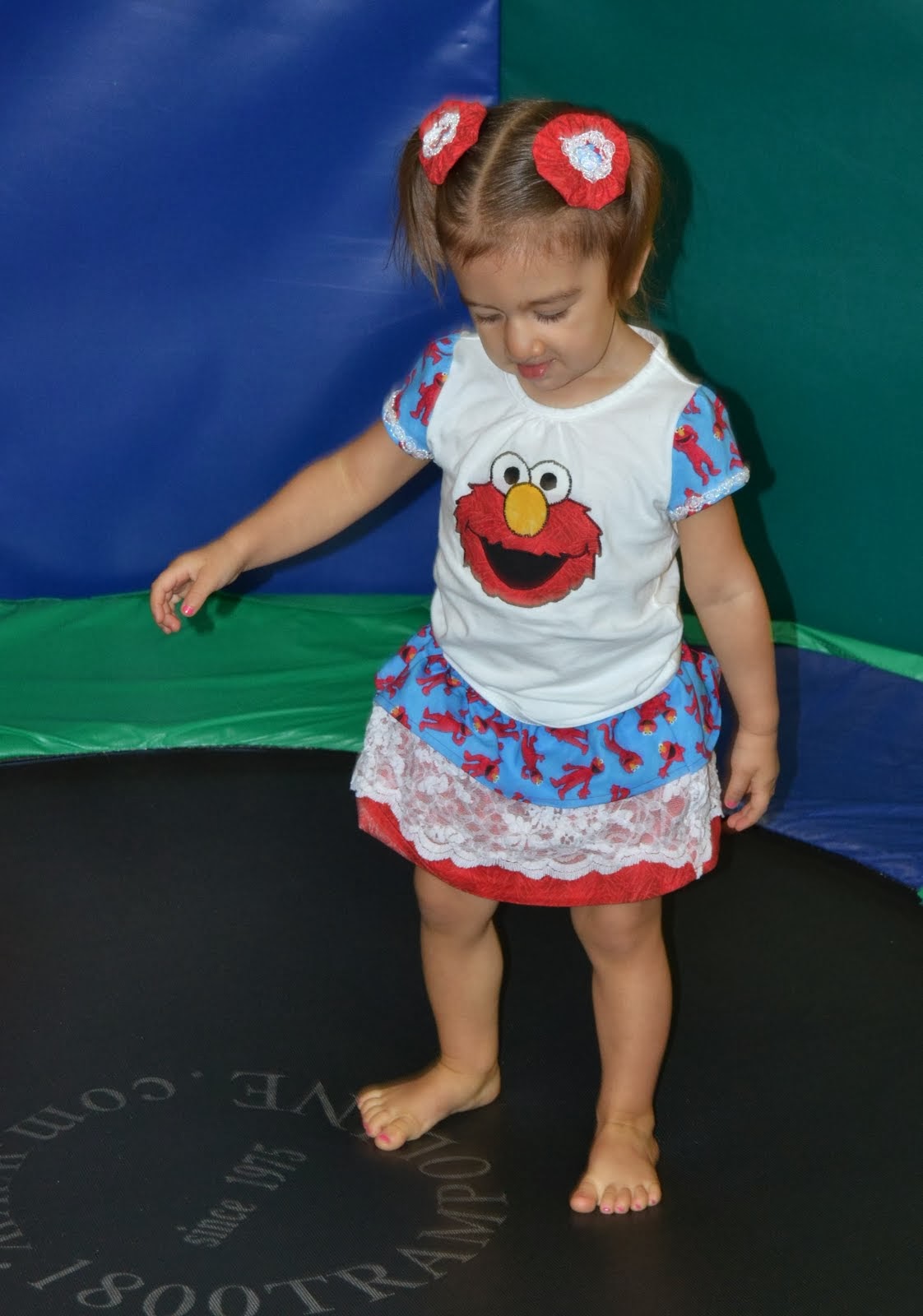 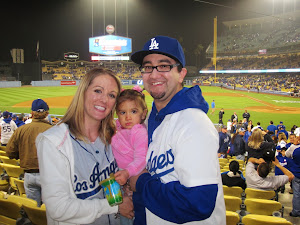 Cindy and Matt do most of our shipping for us. So when you place an order they usually fill it for you. 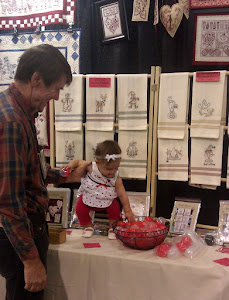 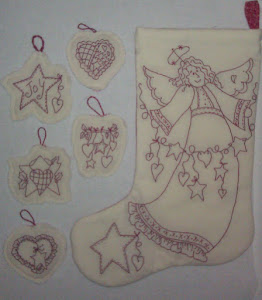 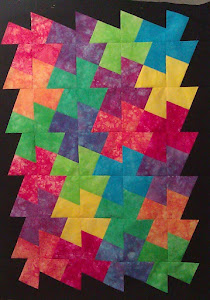 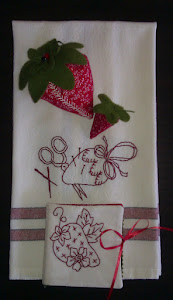 Our Kit Contains the Necessary Fabric and the Towel

This is a From Marti Michell project 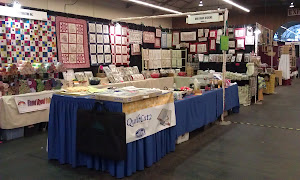 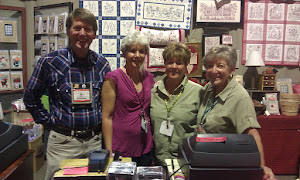 Alan and Me with Robin and Tina of Bird Brain Designs 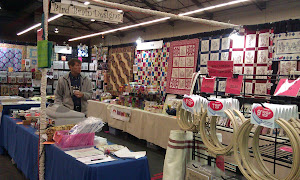 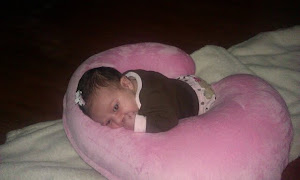 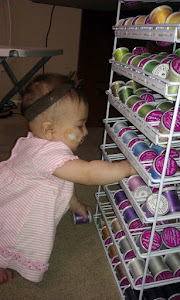 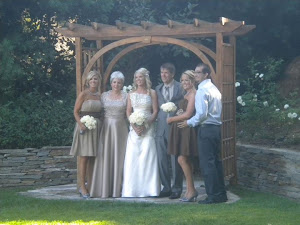 Taken at Our Daughter's Wedding in September 2011

Carol Bledsoe
I own a quilt related business. We have been doing quilt shows in the Western US for nine years. This year we have started doing shows across the country. We specialize in unique products not readily available that are designed to make quilting Sew EZ.